The dates, location and time of the games have been pre-determined.
No additional games will be scheduled for the 2008 North American Baltic Cup.

Structure:
__________
There are three periods per game and if necessary a shorter over-time period and shoot-out will be conducted.
The first two periods of the game are both fifteen minute run-time periods.
The third period of the game is a fifteen minute run-time period unless the difference in goals at twelve minutes of play is less than, but not equal to three goals. The remaining three minutes of the third period will be conducted as stop-time if the difference in goals is less than, but not equal to three goals, at the twelve minute mark of the third period when play will be stopped as indicated by whistle or buzzer.

If the game is tied after three periods then one five minute run-time over-time period will be played after a one minute break.

If the game is tied after one five minute run-time over-time period each team selects three initial players for a shoot-out. If still undecided after each team has three initial attempts to score a majority of shoot-out goals, remaining players are then selected one-by-one until a team scores a goal ("sudden death") - that goal decides the game winner. The whole roster of a team has to take a shot, one-by-one, before a player can shoot again.

Results & Standings:
_________________
Play-off Standings are based on:
(1) Total Game Points The top two teams proceed to the play-off game that will have the identical format as outlined here. If two or more teams are tied in terms of the above criteria then tournament and play-off standings will be decided in the following order and priority: 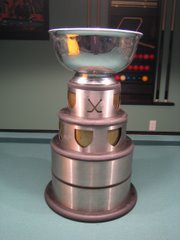 Paldies to our friends at lsak.org for the cool logo!